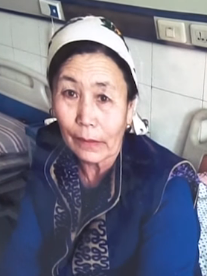 Testimony 1-4: Saltanat Bokeikhan, born on September 1, 1988. In 2008, the whole family immigrated to the Republic of Kazakhstan. Now are living in Maqanshy Village, Urzhar County, East Kazakhstan.

In November 2007, she collapsed for the first time due to high blood pressure and caused cerebral hemorrhage and paralysis. In September 2011, high blood pressure recurred and fainted, causing her to be paralyzed completely. Since then, she only relies on the wheelchair and other people’s aid in her everyday life. The testifier used to take her to Tacheng for treatment. The last time, on October 20, 2017, when she went to see a doctor for the same reason, the local police confiscated her passport for no reason. Therefore, she can not return to Kazakhstan to meet her family.

She is 61 years old and she is a person with first-degree disabilities. Her health condition is getting worse and worse from day to day. Now she has to spend 15 days of a month in the hospital, and the latter 15 days at relatives' home.

Not in detention, but her passport has been taken away and not yet returned.

The testifier went to China in August 2018 holding an invitation letter which is notarized and with stamps of the Foreign Affairs of Kazakhstan and the Chinese embassy in Kazakhstan, but the local authorities didn't recognize it.